This follows her visit to Grace Foam Factory at Sino Uganda Industrial Park in Mbale, to ascertain the damage caused by a fire that gutted it earlier last week and rendered over 700 people jobless.

“The machines that were used in that industry production plus the workshop where the tailoring was being done and the storage for finished products were all gutted. Expensive machines were all turned into scrap,” she said. 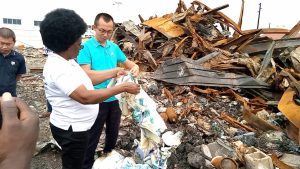 The Minister also noted that the park lacked outside fire hydrants, which could have minimized the damage.

However, she appreciated the fire hydrants inside the factory.

The RCC of Mabel John Achilles appreciated the Minister for visiting the park, trusting that the report given to the government will help in quick decision making.

According to statistics, industrial parks that are outfitted with standard fire fighting equipment register fewer losses both of property and lives.