Children under the age of 8 years were spotted in big numbers among the refugees that crossed Bunagana border to Uganda on Tuesday, 14th June 2022.

Following fresh attacks of the M23 rebels on Bunagana Congo border a number of refugees have been crossing to the Uganda side of the border in Kisoro District.

According to Security sources, the children are seen alone and without their parents or guardians at the Nyakabande Transit Centre as they receive temporary food and shelter. 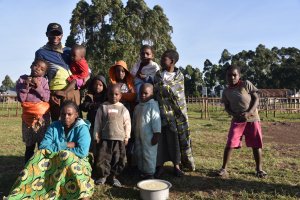 According to Jean Baptise Twizere President of Civil Society group in Bunagana, people in the town live in fear after the M23 rebel’s exercised violence which has prompted them to seek refuge in Uganda. Families have been scattered and in the process, children have been left alone in a state of confusion.

Earlier this week, about 200 members of the Congolese Armed Forces, FARDC crossed to Uganda with their weapons following the defeat by M23 rebels. Twizere, said confirmed that the soldiers    left on Sunday, the 12th of June 2022.

137 FARDC members and 37 policemen withdrew from their positions and crossed the Bunagana border due to the security due to the pressure that was mounted on them by the rebels.

Uganda is already a home of close to 1.5 million refugees from Congo and according to UNHCR and Uganda’s Office of the Prime Minister which manages several transit centres for asylum seekers along the Congolese border, over 2000 people have come to Uganda since May this year due to the insecurity that prevails in the DRC.

The current group of refugees entering the country from DRC are dominated by children without their parents, a thing that needs to be given attention from the humanitarian and refugee organizations