Bus Driver Caught on Camera While Texting and Driving Arrested

Traffic police in Kampala yesterday evening 11th January 2023, netted two bus drivers  for  using their mobile phones  while driving, one from YY coaches and another from Global coaches bus companies.

In a viral video recorded by a keen passenger, Philip Tenywa a driver of YY bus company is seen repeatedly turning his eyes off the road and onto his phone to reply messages on what appears to be WhatsApp.

This raised concern among the public who contacted the police for further action leading to the arrest of the UBF 006 L bus driver along Kampala Lira highway.

“Upon receiving the video, we called the company and the General Manager took action to bring us the driver who is with us now at the Traffic Directorate headquarters in Nateete. We are going to take action on him for using a phone while driving,” said the Traffic Police spokesperson, ASP Faridah Nampiima.

In a similar incident, Fikiri Brown was arrested by the Kyengera police along Kampala- Masaka highway at around 8pm on 11th January 2023. Brown of the Global Bus company was arrested for using the phone while driving. 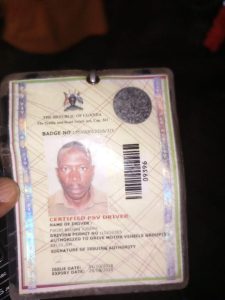 According to the Traffic Police spokesperson, texting while driving could land a driver into a shs100, 000 fine as it puts the lives of the passengers in grave danger.

A report by Traffic Police has revealed that on the first seven days of the new year 2023, a total of 340 accidents have happened on Ugandan roads which have been due to careless driving.

The Uganda Traffic Police has issued new guidelines to boda bodas and bus operators to tighten its grip in curbing the increasing number of accidents.