On Saturday, Byanyima was seen handshaking Kabaka during his birthday run while standing, a practice quite against Buganda culture.

The Buganda kingdom subjects have since been attacking her for disrespecting their cultural leader, a move perceived as dangerous to many young ladies of the generation.

A huge number of Kabaka’s subjects consider this disappointing and humiliating the cultural leader.

Kneeling to greet Kabaka is strong tradition that has been in practice for decades. It is not only in Buganda, but other cultures including Tooro, Busoga, Teso, Acholi, lango etc undertake this as a sign of humility, respect and obedience.

“When in Rome, do as the Romans. You didn’t show respect and this isn’t an argument of gender, even men take the bow,” Jesse Sakira said in a tweet. 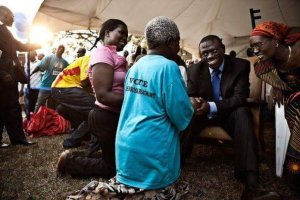 “The question is why didn’t u kneel down while greeting him? If you admire our culture as you say you would have done what was supposed to be done because if people like chief justice did it, who are you not disobey?” Esther Nankinga asked in a tweet. 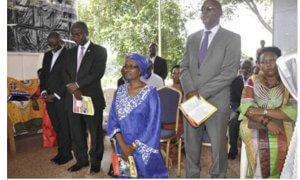 “Next time learn the code of conduct of a woman before the Kabaka before meeting him, it’s not about status or money or fame, it’s a tradition and it’s very sensitive,” Ben Kasumba said.

On 2nd July 2022, Byanyima visited Mengo ahead of the Kabaka’s run that took place on July 3rd as the UNAIDS’ Executive Director where she thanked the Kabaka for championing the campaign.

A lot of debate has been going on about the homosexual issue in Ugandan media. This debate was...
National News

The Uganda government and representatives from over eleven African countries have committed themselves to ending HIV/AIDS in children...

A lot of debate has been going on about...