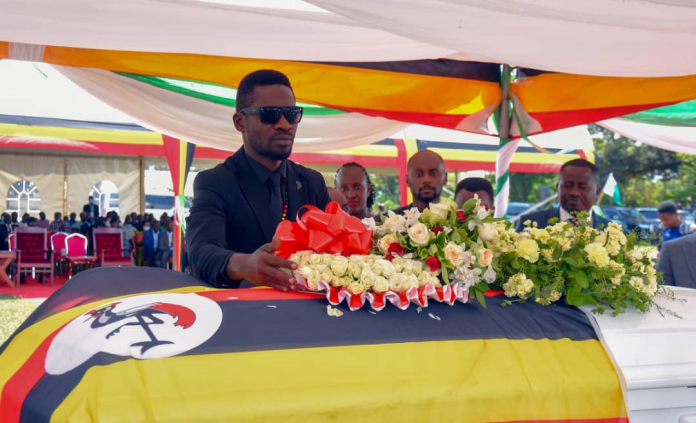 The Buganda elders have cautioned Robert Kyagulanyi, aka Bobi Wine, the leader of the National Unity Party (NUP), against the continuous use of burials to preach tribal hatred.

On Monday, November 21st, 2022, while attending the burial of Dr. Paul Kawanga Ssemogerere, the former president general of the Democratic Party who passed on at the age of 90, Kyagulanyi used his funeral to preach tribal hatred and political violence. He described the deceased as his teacher and mentor.

In his political utterances, Kyagulanyi further alleged that the deceased had told him of the events surrounding the deaths of some former prominent officials.

But while delivering a speech, the Prime Minister of Buganda Kingdom, Charles Peter Mayiga, described the late Hon. Dr. Paul Kawanga Ssemogerere as a man who loved peace and hated violence. Prime Minister Mayiga emphasized that the late Dr. Ssemogerere was an important, down-to-earth politician who understood that leadership is a responsibility to serve people.

“We must stop “playing” politics. When we play politics, we reap chaos. Politics must be handled with the seriousness it deserves!” Prime Minister Mayiga said. His statement was viewed as a direct caution to mourners who had talked about hatred and political violence.

Jenifer Muwanga, a close relative of the deceased, dismissed Kyagulanyi’s claim as a political ploy to confuse Ugandans.

She maintained that her uncle was a peace-loving leader whose traits were best aligned with stability, hard work, forgiveness, and being a gentleman.

“Kyagulanyi, if it’s true that our late father, whom we buried today, told you the events surrounding these deaths, why didn’t you talk about them when he was still alive? Why wait on his burial to allege stories that can never be confirmed?” Muwanga questioned.

If there is anything Bobi Wine should pick up from his mentor, it should be sowing seeds of peace, not hatred, Derrick Ssemakula, an elderly DP stalwart, told Kyagulanyi.

“The death of our fallen comrade should not be used to spread hatred; we should instead use it to promote peace, unity, and reconciliation. We shouldn’t believe in what Kyagulanyi said. First of all, he is a chaotic political opportunist against the DP and Uganda,” Ssemakula said.

Norbert Mao, the current President General of the Democratic Party and Minister for Constitutional Affairs, praised the late leader as a peace-loving gentleman.

“The death of Rt. Hon. Dr. Paul Kawanga Ssemogerere has robbed Uganda of an indefatigable champion of non-violence, the rule of law, and constitutionalism. He practiced civility amidst extreme provocation,” Minister Mao said.