The Brigadier also invited the media to Luwero to witness the discovery, stating that ‘The media is invited to come tomorrow 16 June 2022 & see for themselves. Transport is available at the Media Centre at 10.” 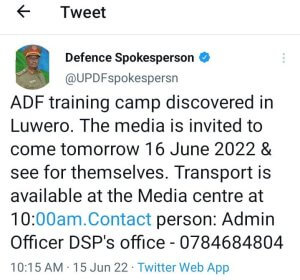 Information reaching our desk shows that the camp was discovered after the interrogation of an ADF assailant only identified as Ramathan.  Ramathan is a suspect in the attempted assassination of Works and Transport Minister Gen Katumba Wamala.

The training and recruitment camp is a ‘compound’ owned by a one Kabonge Umar Achobe located in Kikubajinja town council in Luwero district. Kabonge is an ADF assailant born in Nakaseke district and is currently being held by security for the attempted murder of Gen Katumba Wamala.

Security sources say that this house is where training and planning of the attempted murder of Katumba were planned. They continue to say that the same cell that tried to assassinate Gen Wamala is the same cell that planned the foiled bombing attempt at the late Lt Gen Lokech’s funeral since they have bases in Gulu and Arua districts.

Security discovered bomb making equipment, firing pins, and bullets among others at the house. The house has an underground trench or cave that is 13ft deep and 9.5’9 inches wide which was used to train other assailants how to shoot. The house has a welding shop at the front also owned by Kabonge that was used to disguise the sound of bullets firing.

According to Sources in Luwero, Kabonge has lived in Kikubajinja for 12 years and has had a close relationship with Hajji Walugembe Umar who is a suspected ADF spy. Hajji Walugembe Umar is a deputy principle of Hamza Islamic School and is believed to have had a hand in the recruitment of ADF combatants in Luwero district.

The UPDF and other security agencies are working together with the media to uncover other cells and training grounds of the rebel group.

Security agencies today provided transport for journalists to visit the crime scene. More details will follow after the visit

A lot of debate has been going on about the homosexual issue in Ugandan media. This debate was...

A lot of debate has been going on about...