Hon. Matthias Mpuuga  the Leader of Opposition (LOP) in the 11th parliament, is under scrutiny by his Party President  Bobi Wine, for handling matters of parliament in a more rational and systematic way and defying Bobi wine’s deep-seated radical methods.

According to sources, Bobi Wine held a press conference on 30th November at the party headquarters in Kamwokya, following Hon. Francis Zaake’s outbursts in parliament about the alleged kidnappings of NUP supporters.

Zaake failed to follow the parliamentary rules of procedures in presenting his grievances, and efforts to bring him to order by the Deputy speaker Tayebwa failed. This ended with him being sent to the disciplinary committee.

During the meeting, Bobi Wine praised and thanked Zaake for behaving illogically. He stated that he is thinking of rewarding Zaake with the position of the LOP replacing the level headed Mpuuga who prefers a more rational approach of following rules of procedure. 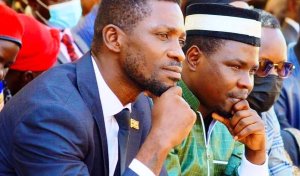 “Thank you for not shutting up Zaake, NUP is very proud of you, I had already communicated my stand to all NUP leaders in parliament including Mpuuga to use more radical means to remove the Government, if you want to be normal for us we are not normal,”  said Bobi wine.

According to some NUP committee members, Bobi Wine is more interested in taking a more militant approach to getting into power than the diplomatic policy Mpuuga employs.

“Stop this nonsense of talking about policy. There is no policy in Uganda that will be implemented. Giving you time to get things straight in parliament, any more display of disloyalty will be punishable,” Bobi wine stated.

Dr. Gerald Karyeija, a political analyst, says Bobi Wine values personal loyalty more than being politically upright. He continues to state that Bobi Wine feels threatened by those more knowledgeable than he is and those seeking to use rational methods of conflict resolution as opposed to his radical methodology.

“You now have a radical group which is activist and populist, and the other group which wants to be more rational and systematic. And there is the impression that the NUP leadership in parliament is largely rational- based whereas the party leadership is largely activist in mode,” said Karyeija.

According to Dr. Karyeija, Bobi wine started with vigor and zeal, but seems he had to deal with the party losing relevance faster than he had expected which has left him pushing for radicalism from his MPs.

In October, the LOP stated that he will not be radicalized, stating that he disagrees with those who act out of impulse.

“I will not support anybody who harbors an interest to protest on a matter that has not been understood, has not been heard or feels aggrieved and believes the only way to be heard is to protest,” said Mpuuga.

The difference in approach, political knowledge and prowess between Mpuuga and Bobi Wine has caused an irreparable rift between the seasoned and calm veteran politician and the radical and overly excited political newbie that will shatter party structures.