Bobi Wine Over estimates his strengths 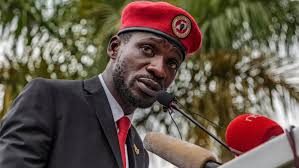 On 3rd October 2018, a writer by names of Eric Mwine Mugaju, published an article on the aljazera website titled ‘Why Bobi Wine is likely to fail if he takes power in Uganda’ which highlighted issues not directly linked to Bobi wine but instead undermined the achievements of President Museveni. That’s where his supporters go wrong.

Instead of focusing on building electoral base by clearly outlining capacity to take Uganda to the next level, People Power is feeding on the acclamations freely given by the misguided youth on the streets of Kampala.

Recently Bobi wine selected delegates, a new development to aim at winning the Presidency. The method of appointment of these delegates was a depiction of a dictatorial character in Bobi wine as a person.

The Ghetto president is short sited to think that every Member of Parliament that voted against the age limit bill is for him in my opinion, which opinion is shared by many others.

Bildad Moses Adome (Jie County) Member of Parliament, who was appointed as the main coordinator in charge of Karamoja region, turned down the appointment, saying he was not consulted.

That is the mistake Bobi wine and his camp is making. Generalizing the Political events around the country and seeking exaggerated respect and praise just like in the music celebrity world.

In forming the political party National Unity Party-NUP it is evident that Bobi wine went off the People Power grid.

He identified the Political party and approached its owners, conducted a monetary deal with them, processed the name change and finally carried out a delegates meeting in which he elected himself the President of the Party.  Such a character predicts dictatorship.

Whereas some members (who benefit directly from the marriage of people power and NUP) are happy about the arrangement many other people power sympathizers have already registered resentment and described the move as a betrayal.

The point I am putting across is simple, people power is sentimental and a wave of “Kajjanja.” Therefore there is no measurable connection between its leadership and its sympathizers, a thing that puts Bobi wine on a high level without a foundation to stand on. He needs ladders to step on.

He however is blind to that fact because his supporters already put him at a climax and abandoned him there. He now doesn’t have a way to step down or even climb further. He knows that fact, so all he is left with is to hang in there. But he needs to bring down the ego because the fall will be as big as his rise.