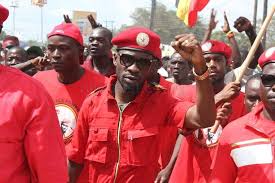 What is eye catching on these media appearances however, is his continuous outrageous utterances.

On his most recent aljazera appearance, the artiste claimed that President Musevenis reign has been more brutal than any other leader before him, including Iddi Amin.

It is this nature of misinformation that is currently defining his campaign. That and that of interolance.

The singer has also promised to launch a nationwide campaign against the government under the false auspice of national consultations.

This will put him against the security agencies since the activities are illegal and hence play into his allegations of brutality and shrinking space for opposition in Uganda.

Bobi Wines strategy is quite simple yet sophiscated in nature. Reach out to the international donor and investment community to abandon the regime and its development projects and turn the population hostile.

This way, the ground will be set for violent clashes with authorities country wide, all in the eyes on international media.

This will however fail, the population will not back another knight in shining amour with no clear plan and manifesto for this country.