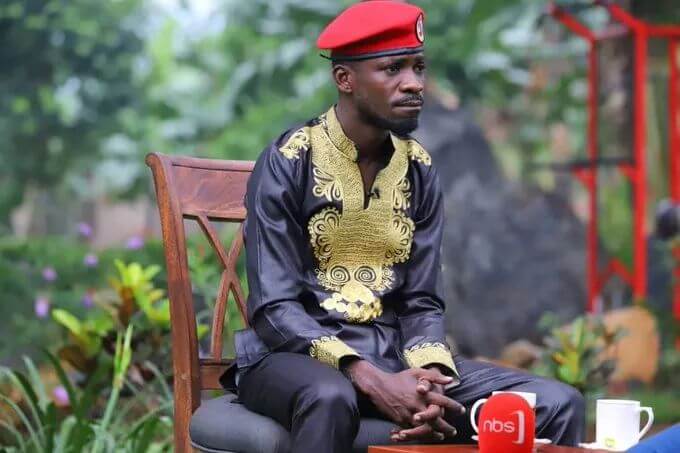 People Power leader, Robert Kyagulanyi blew an opportunity yet again to sell himself to Ugandans in yet another one sided interview with NBS host Simon Kwagga Njalla today morning. Bobi who managed to control the host from start to finish of the interview, kept on insisting on being optimistic in light of glaring political challenges ahead of his bid for presidency of the country come 2021.

Bobi Wine also took the opportunity to deny allegations of splitting the Democratic party and being at good terms with it’s leader Nobert Mao who is currently battling an insurrection in the party led by members who have swore loyalty to the people Power movement.

Bobi Wine also dismissed being at loggerheads with FDC strongman and former Ally Kizza Besigye whom he is set to get ahead to ahead as they struggle for supremacy in the same Opposition constituency ahead of the Presidential poll. Although he made a call for the veteran, perennial candidate and other candidates to side with him and support his bid as he represents the will and choice of the people.

He claimed that he will not wait for other Opposition leaders to join him in the struggle although he admitted to holding talks with new Presidential entrant General Henry Tumukunde whose candidature he defended as representing the interests of the people.

On a number of policy issues like employment, Bobi Wine criticised Ugandans seeking jobs in the diaspora while not suggesting any specific policy measures he would undertake to improve on local employment opportunities in the country.

Bobi Wine didn’t spare Parliament either, blasting the institution and the other arms of government as paper tigers inspire of the fact that he is a parliamentarian himself though he has hardly attended and contributed to plenary during his time in the August house.