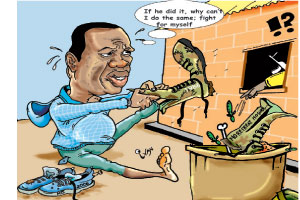 Former forum for democratic change came out strongly against a daily monitor cartoon that depicted his reaction to questions over his future involvement in active elective politics in the country.

The perennial presidential elections loser had been earlier on by a large section of opposition commentators to quit and give chance to other newer candidates so as to give the opposition a chance at upsetting the status quo.

It is due to a similar attitude that led to the dismissal of former FDC president, Mugisha Muntu who was forced out of the party due to challenging of Besigye for the opportunity to contest in the country’s presidential vote.

Besigye’s reaction also tells of his intolerance to opposing views and criticism. Just like many have said, besigye belongs to a group of radicals in Uganda’s politics, something that has endeared him to rogues only interested in seeing the country burn in pursuit of power. To attack the fourth estate so vehemently also points to his over heigtened sense of self entitlement. It is also an indicator of the anger he has towards the Newspaper after it came under praise of recent from President Yoweri Museveni for unbiased reporting.

Besigye has also clashed with his former ally and now foe, Robert Kyagulanyi who has pit himself against his former mentor by declaring his intentions to run for presidency come 2021.

The fact that Kyagulanyi intends to use the same techniques and tricks as those used by besigye is also set to be very critical point ahead of the campaign. Kyagulanyi has copied everything from the Besigye cookbook a thing that is set to further alienate the two from each other.

The fact that Besigye refuses to quit and leave space for others is a contradiction of his preaching and alleged ideology. This aptly points to ideological ineptness from the former opposition leader. He at this point lacks moral authority to criticize others since he has been given a chance for now almost two decades.

Many have rightly pointed out that his refusal to quit is an impediment to growth and expansion of the political space and democratic process in Uganda.