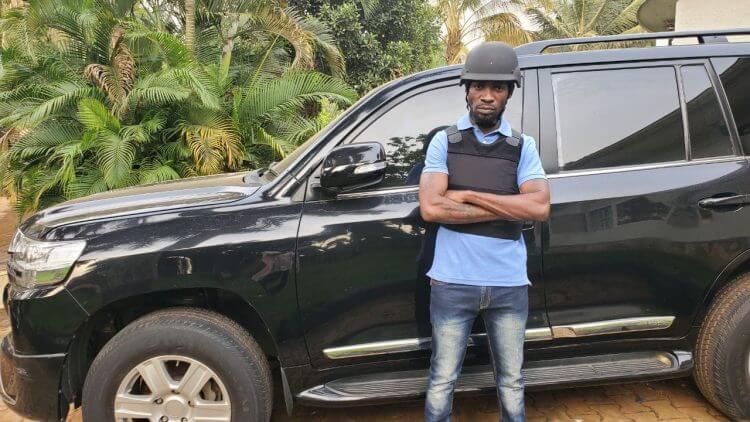 At the height of the election petition, in the midst of rumours, he was contemplating or expecting to withdraw the case from court, National Unity Platform president Robert Kyagulanyi Ssentamu alias Bobi Wine announced he had landed a big gift from colleagues abroad and in Uganda- an armoured car.

He posted posing in front of the brand new Landcruiser V8 armoured car, and declared it was a gift from friends who were looking out for his life, which he insists is in danger ever since he made the choice to stand for the presidency.

Bobi Wine made the claim that even the bulletproof gear he burdened with halfway the campaign process was a contribution from his colleagues, and it went far enough to protect him from death during a scuffle in Masaka that ended in nasty injuries to his media man Ashraf Kasirye.

On the day he made final declaration to withdraw petition from the supreme court, Bobi parked the armoured vehicle at the offices of the NUP, and it instantly turned into a “tourist attraction”.

Ghetto Youth, party fans, and Bobi Wine’s personal supporters gathered in multitudes to catch a glimpse at this car, to take pictures with it and of course a debate ensued on what the car looks like on the inside, plus its properties.

A debate led by Kawempe legislator Muhammad Ssegirinya argued that the vehicle was fitted with a kitchen, bathroom and had the capacity to identify an enemy from a yawning distance.

“If it identifies the enemy, it will fly at a very high altitude and come back down with a bang, onto that enemy’s head,” Ssegirinya told a zealous group of youth.

It is at this time that Bobi Wine announced he was withdrawing from the court process and appointing each one of us a judge to determine the change we want.

The two announcements came at about the same time, all far different from each other.

While Bobi asked us to step in and direct the change we need, he announced he would be cruising in a self-contained bullet -proof car.

While Bobi announced he was withdrawing from the case over several reasons, a machine that breathes like a person, lights like the sun, was waiting on him to board.

While Bobi asked that we safe guard our victory, he was ensuring the safety he has acquired.

While all these announcements happened, the people who had appreciated Bobi for being one of them, were looking at his car with admiration, questions lingering in their minds, and debating on so many things surrounding the car.

It was a huge diversion for them, and could mark the way he will be viewed even after that day. I want to assume most of them believe in and follow MP Ssegirinya, thus will take his words as binding. They are happy for Bobi, and at one point will imagine they are no longer the same like him.

Such people when they return home, it will hit them that they do not have a bullet proof car or gear, and when they come to gather for Bobi Wine’s sake, he will be inside cooking and bathing while canes land on their empty stomachs.

Those around Bobi Wine always viewed him as vulnerable; Yes, they will break into his car and we have to stay around to protect him.

Others were always on the side waiting for the car windows to be smashed and they will run to his rescue with a new windshield, new glass etc. Now this group have been disappointed, where will they get an armoured car spare in Kiseka market?

What is the use of people forming a human ring around someone who is no longer vulnerable?

At the end of it all, Bobi must justify this car donation to both the government and his supporters over time, or else it becomes a government property or his property to help him stand far aloof and lose those who have continued to view him as one of them.