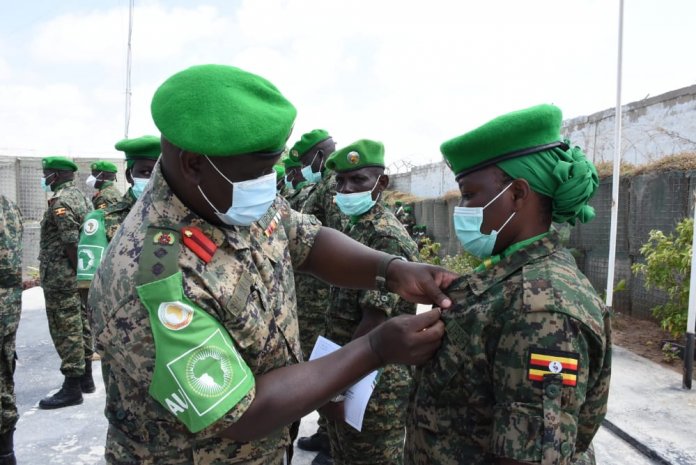 The African Union Transition Mission in Somalia (ATMIS) has praised UPDF for their contribution in controlling insurgencies and keeping Somalia peaceful for the communities to thrive.

African Mission in Somalia (AMISOM) was a regional peacekeeping mission operated by the African Union with the approval of the United Nations Security Council.

This later transitioned into overseeing a peaceful transition from a regional force to the Somali security.

The Battle group UGABAG XXIII, under the command of Col. Ezra Mwinyi Byaruhanga, deployed to Somalia in October 2021, completed its mission and will be returning home, was celebrated and praised for its professionalism and resilience.

Officers were awarded with certificates and medals, which was presided over by the Deputy ATMIS Commander Maj. Gen. William Kitsao Shume-in charge of operations and plans, who commended UPDF for upholding the mandate of the ATMIS.

Soldiers that belong to the Uganda Battle group (UGABAG) XXXIII who have completed a year tour of duty in Somalia received the medals and certificates at a ceremony held in Mogadishu.

“We are proud of your contributions and achievements, as you return home feel proud that you made Somali people and the National Army of Somalia happy and grateful for what you have accomplished,” said Maj. Gen. Shume.

The battle group under Col. Ezra Mwinyi Byaruhanga Commander was stationed at Forward Operating Bases (FOBs) in Arbiska, Albao, Lafore and Lantabur in lower Shabelle region. This group was also tasked with securing Government key areas in Mogadishu, Presidential Palace, the federal Parliament, Mogadishu seaport and the ATMIS base.

The Uganda ATMIS contingent commander, Brig. Gen.Keith Katungi, was full of praises for the outgoing group which he says conducted productive offensive operations against the Al –shabaab terrorists and securing the Presidential elections, Federal parliament and key areas assigned to them.

Somalia has been under insurgency and terror for a number of years, which greatly affected its growth and security of other neighboring countries. With the UPDF and combined efforts of African countries it is starting to normalize.