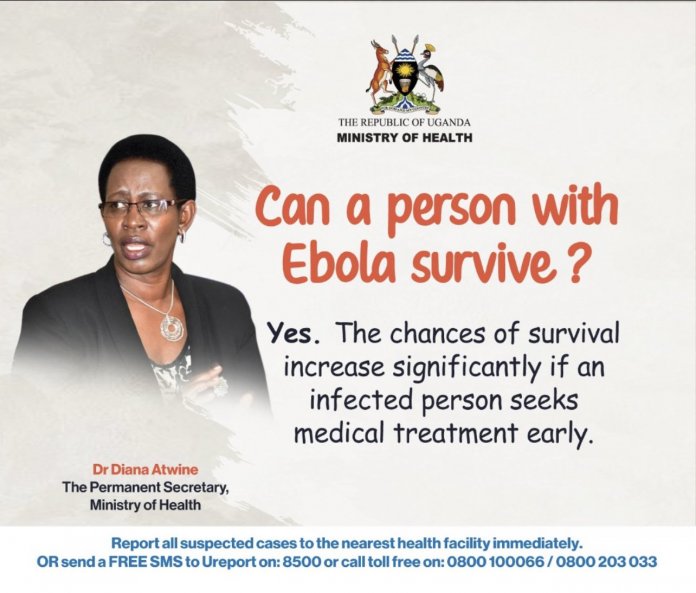 When Ebola is detected early, it can be treated and the chances of survival are high Treatment of Ebola includes;

One of the heroes of the five year Luweero bush war that brought the current NRM government to power, Lt Col (RTD) Ahmed Kashillingi has died at the age of 82. According to the Security Minister Maj. Gen. (RTD) Jim Muhwezi’s tweet, Kashillingi, who was a brave and dedicated soldier diligently died today morning.

The Parliamentary Committee on Health has tasked the management of Mulago National Referral Hospital to explain allegations of continued corruption, extortion and fraudulent dealings at the facility. The hospital management, led by Dr. Rosemary Byanyima on Wednesday appeared before the committee chaired by Dr. Charles Ayume over renovation works, the status of equipment and budget of the facility.

The United Kingdom government has given Uganda £2.2m (about Shs9.6bn) to fight the Ebola Virus Disease in the country. This was revealed on Monday by the Development Director at the British High Commission in Kampala, Phillip Smith, during a media engagement on the Ebola Outbreak and Response at the Ministry of Health Headquarters in Wandegeya, Kampala.

King Charles has hosted a celebration of Ugandan Asians who fled to the UK 50 years ago. It was the King’s first major engagement to take place at Buckingham Palace since royal mourning ended following the death of the Queen. At the time the government had welcomed around 28,000 Ugandan Asians with British passports to start a new life in the UK. The event was staged by The British Asian Trust which was founded in 2007 by King Charles III and a group of British Asian business leaders to tackle widespread poverty, inequality and injustice in South Asia.

In a bid to promote road safety on roads and reduce injuries, and deaths as a result of motorcycle accidents, Uganda Breweries Limited (UBL) has donated safety gear to 200 BodaBoda operators. The donation was part of the planned engagements as UBL marked Safety Awareness Week to promote the culture of safety among employees.

Bukwo district chairperson Julius Chelimo will face death penalty if convicted with aggravated trafficking in children. He is also battling charges of aggravated defilement, which attracts a maximum sentence of life imprisonment, upon conviction. Today, 3rd November, Kira Court Chief Magistrate Roseline Nsenge read out the charges to Chelimo but refused him to plead to the offenses, saying she has no jurisdiction to handle the matter. “You will plead to the charges at the High Court before the trial starts,” she said.

While appearing before Parliament’s Health Committee, Dr. Rosemary Byanyima, the Acting Executive Director of Mulago National Referral Hospital revealed that the cost of handling a single case of organ transplant will likely cost Shs50Million minus the surgery care to be received. She indicated that the hospital has witnessed an increase in patients seeking for kidney failure services like dialysis, which is why Mulago will start with kidney organ transplant before focusing on other forms of transplants.

The Minister of State for Primary Education, Hon. Joyce Moriku revealed that government has issued a directive to all schools allowing all pupils and students to sit their final examination. Moriku told the House chaired by Speaker Anita Among on Wednesday, 2nd November 2022 that parents and school owners should work out modalities of paying up the school fees balances and not deny the learners the exams.

Ntungamo district health facilities including Itojo Hospital are still grappling with a stockpile of expired drug supplies for more than a year. This was unearthed during the ongoing State House Health Monitoring Unit investigations on the performance of health facilities in the district. The Unit executive director Dr. Namara Wallen attributed the expiry of the drugs to absenteeism of health workers.

According to the District Veterinary Officer, government has warned the general public on the outbreak of foot and mouth cattle disease in the sub counties of Aminit and Kamutur in Bukedea district. Therefore, cattle will not be allowed to move freely to any neighboring districts in the bid to control the further spread of the disease.

On 2nd November 2022, government in conjunction with National Drug Authority mounted an operation in Malaba border town that resulted to the arrest of Gajorin pharmacy proprietors, for operating without a license since 2020, which is against the laws of Uganda.

According to the Resident District commissioner Mr. Atuhairwe Robert, government has constructed a new office block for the Office of the President, which is to hold an office commissioning ceremony tomorrow, 4th November 2022, and the chief guest will be the Minister for Presidency Hon. Babirye Milly Babalanda. Atuhairwe, further said that as a way of celebrating the new office, this will benefit the public thus better service delivery.

Government in conjunction with National water and sewerage corporation (NWSC) constructed a public toilet that will be commissioned for the public use to the residents of Kabira town council.

NWSC officials revealed that the construction outlayed Ugx15 million. Present was the chairperson board NWSC, LCV Chairperson, NWSC area manager and others.

Tanzania has mobilized soldiers to reinforce civilian firefighters and volunteers involved in a fire on Mount Kilimanjaro, which has been raging for more than ten days.

The fire started on 21st October 2022, near the Karanga camp, at an altitude of about 4,000 meters, a crossing point for climbers on their way up the continent’s highest peak nicknamed the “roof of Africa” (5,895 meters).

All commercial modes of transport were paralyzed on Wednesday by an impromptu strike of employees of the Tunis transport company known as Transtu, to protest delays in the payment of salaries.

Bus stations and bus stops were crowded with passengers who had been waiting since dawn, complaining of not being able to reach their place of work.

Police and residents on Wednesday said dozens of children were abducted by gunmen from a farm in northern Katsina state and the kidnappers were demanding a ransom for their release.

The Mali’s Economy Minister, Alousseini Sanou, on Wednesday stated that Mali expects Russia to send shipments of fuel, fertilizer and food worth around $100 million to the country in the coming weeks.

Russian President Vladimir Putin discussed the provision of such supplies with his Malian counterpart in August, a sign of deepening ties as Bamako’s relationship soured with its long-time ally and former colonial ruler, France.

President Guillermo Lasso on Wednesday, declared a state of emergency and curfews in two Ecuador provinces after a series of attacks by increasingly powerful drug gangs killed five police officers. He said the attacks were a declaration of war.

The gangs had threatened to retaliate after the government introduced tougher measures to curb their power inside prisons. More than 400 people have died in gang violence in prisons since 2020.

Israeli forces killed a 54-year-old Palestinian man in the occupied West Bank today. They said he carried out a car-ramming attack at a checkpoint near the city of Modiin on Wednesday, seriously injuring a soldier.

The 54-year-old Palestinian was shot dead at the site of the attack.